Home 2011 Luglio Modifications on the regulations for electric motors

Modifications on the regulations for electric motors The EC 640/2009 Directive foresees eco compatible design requirements in electric motors with the objective of inserting them in the market and putting them into use, with the possibility of integrating them with other products.  This regulation is part of a greater project that the European Community has conducted for reducing energy consumption.
Electric motors represent the main energy burden for industries in the European Community, where motors are engaged in production processes.  The fields in which such motors are used represents a total of 70% ca of the electricity consumed in the industrial field.
The overall potential in economically improving energy efficiency in these systems can be quantified in 20 to 30% ca.  One of the main factors behind of such improvements is the use energy-efficient motors.  Thus, electric motors become a primary product for which eco compatible design specifications must be instituted.
A preparatory analysis demonstrates that electric motors are put on the European Community market in huge quantities and the energy consumption of these electric motors during use represents the most significant environmental aspect throughout the entire life cycle, with a annual power consumption of 1067 TWh in 2005, equivalent to a CO2 emission of 427 Mt.   In the absence of containment measures, the forecast is that power consumption could increase up to 1252 in 2020.  The survey concluded that energy consumption during the motor’s life cycle and the power consumption during the motor’s use can improve significantly, in particular if in motors that are used in velocity and variable load applications are equipped in with variable speed drives.
The present directive must encourage a penetration in the market of technologies that diminish environmental impact of electric motors during their life cycle, with an energy saving, during their complete life cycle, estimated respectively in 5500 PF(2) and 135 TWh by 2020, if confronted with setting in which no measures were to be adopted.
Calpeda has adopted this directive that has become effective June 16th.  The next deadline for further improvements is January 1st 2015.

What does the directive set?
The regulation EC 640/2009 is applicable to electric motors, the type and size of which are defined in Article 2.1:  three-phase induction motors, with 2, 4 or 6 poles, rated voltage up to 1000V, rated power output between 0,75 to 375kW.
Which motors enter such requirements?
All pumps that are coupled with surface motors with rated power outputs mentioned above.  Recently, in work teams in which Calpeda participated, some interpretative doubts on pumps that are not included in this directive were clarified.
–    submersible motors (even dry installed)
–    deep well submersible motors
–    motors that are fully integrated in the pump unit
These clarifications have ascertained instead that all motors for one unit bloc pumps with all protrusion variants of the drive shaft are included in the scope of the regulation.
What prospective remain for those pumps excluded by the regulation?
Standards will be set also for these typologies.  There are word teams that are working in this direction in which Calpeda is following up actively. 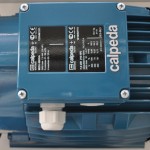 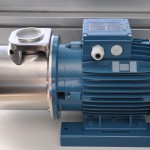