Design, development, production and then distribution.

These are the steps that are normally followed when making all our products.  To make sure they all answer market demands perfectly, however, we have added something extra to the start-up, a kind of test to calibrate true production, and to verify “if everything was done well”.

The product we are talking about is IMAT, a variable speed system, and the testing ground was the British market, which is particularly sensitive to energy saving and, as a result, to products like the inverters.

A training session on the new product was held at our subsidiary in England in mid-April.

Calpeda UK had already been swamped by market response following the launch of the Easymat frequency converter, appreciated because it is a compact, efficient and reliable solution, and also very easy to program.

Now there are great expectations also for IMAT, which will be available from June and which completes our range of variable speed products.  Being three-phase, IMAT is aimed at the business/industrial sector, while EASYMAT (single-phase) was designed for home use.

Training was held over three phases.

The first was inverter assembly on a pressurisation unit, together with the Calpeda UK technicians; we assembled the drive on-board an already-prepared unit to show the installation and wiring methods.

After this we dedicated time to specific product training, explaining the product characteristics to the sales team and the technical assistance, then demonstrating operation with the wired unit.

Suggestions for further increasing drive capacity and making it more in line with market demands came from these first two phases.

Finally, a pressure boosting set for a football stadium and a clinic was installed on-site.  More specifically, we replaced a fixed speed set with a set that had two variable speed pumps and an IMAT inverter. 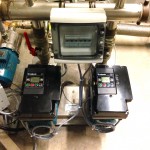 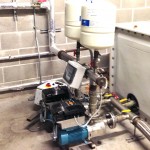